These are Theodor’s hands. Or better said: Theodore’s fingers, the little fingers on each hand, bend inwards in about 40 degrees. 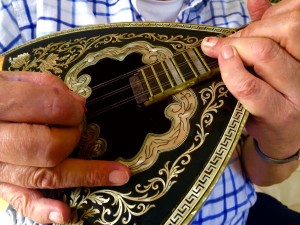 Theo (as I like to call him) was born with these fingers. What Theo would have loved to do with these fingers since he was a little boy, was to play music. But this wouldn’t happen for many many years. Let me tell you that the story has a happy end so we take this out of the way. Still a story worth to be told and a very inspiring one.

Theo is born in Piraeus on 04 April 1945, almost 6 months after the German army left Greece and just one month before Germany surrenders to the Allies. Theo wouldn’t know any of these by this time, since as a newborn baby had clearly other priorities and interests.

He grew up in Piraeus together with his 5 sisters, where he went to school.  After he finished elementary school, he started working in a herb store during the day and going to the evening school to continue his education. On Sundays he and his father would take the public transportation (2 hours) and walk another 30 minutes to get to a field in north of Athens (Kifisia) where they had a garden with all sorts of plants and vegetables. This was Theo’s life till he finished school in 1963.

His father played clarinet and  trumpet during his military service, and mandolin after that. Theo never heard his father playing the wind instruments but he would listen to him play the mandolin very often. The Mandolin would be their companion on Sundays when they took a break from working on the field. Theo loved the sound of it, loved the music and asked repeatedly for music lessons to learn to play an instrument. His parents never let him take any lesson or even allowed him to learn music. They wanted him to become “someone” and not a “nobody artist”, “working” at nights with all the scum and underworld.
Theo is a kind person, a good soul, smart and hardworking. Never afraid to try out new things, obsessed with the detail when needed, totally relaxed and flexible when not. And on top of all these Theo was, and still is, … quite stubborn.  When he gets his head into something it will take extra measures to keep him away from it.
So he did try to grab some opportunities to learn music, but either he was left alone to fail or was stopped in the hard way.

He’d take the mandolin on Sundays and try to play. His father would watch a bit and then totally ignore his attempts. He did not take the mandolin away, but never did anything  to show him how to hold it, tune it, press the strings on the fretboard, hold the pick etc etc. After break, they would go down the creek to load water and carry it up again to water the garden. A long uphill way with several gallons of water on his back.

His sister was sent to accordion lessons. They bought her an accordion too. Theo was “allowed” to go along and watch during the lesson. His sister though had “other plans” in Greece of 1957 so she’d try to use the lesson time for… more interesting activities for a young teenaged  woman. A little later the accordion and Theo would just be at home, more often than his sister to lessons.
Theo grabbed the accordion and started trying out. The ultimatum came from his mother who said to her husband:  “One of the three will leave the house: Either you, the kid or the accordion! Decide! ”
Theo and his father stayed. The accordion was gone.

Theo became 15, it’s the 1960’s and he bought a blues harp. He couldn’t manage to get anything good sounding out of it, so he put it away. Another frustration to add up. At the same period his family would rent a room to young man, who happen to have a guitar hanging on the wall. Theo asked if he could borrow it. He could.
Theo took the guitar and starting “doing the Elvis” as he describes it. This Elvis impersonation lasted very short and ended in an even more brutal way. The guitar was taken right out of his hands, thrown to the floor, stepped upon several times and the remains got thrown back to the speechless Theodore. He says this was the last music related incident for many years. This marked the point where he had accepted: he will never learn music.

Fast Forward in 1976. Theo calls his father on the phone. When he picks up Theo plays a couple of chords on a piano. “Father I learned to play the piano” he said and played a bit more. “Well done my boy, well done” said his father.
The road thill this point was long and it wasn’t even the end in Theo’s attempts to learn music.

Back in 1963 Theo finishes school and wants to study. The family has no money for that. His sister was married to a German and lived in Hamburg. This is were Theo’s next stop will be. He left knowing no German at all, to stay at his sisters and study in Hamburg. The Acropolis Express train brought him to Munich (like it did for thousands emigrants who rebuild Germany during the 50s and 60s)  and from there the Deutsche Bah brought him to Hamburg.
He had to do a 3 years apprenticeship in ship construction before he could study. After he finished the apprenticeship he earned a scholarship form the State of Hamburg and  started studying ship construction engineering in 1967.

In Greece the military dictatorship had taken over the power just 17 days after Theos birthday.
After his first 6 months of studying Theo went to Greece for a short break. He was not allowed to go back to Germany to continue studying before he did his military service.
Being a “studied” person he was sent immediately for officers training. He finished it, took his decoration and …. downgraded to a normal soldier two days later and sent to the bulgarian, turkish, greek borders  like all “others like him”. The dictatorship  found out  Theo’s involvement with Greek democratic parties abroad which led to his degradation. He will be able to go back to Germany 3 years later (after a 28 months service and several months of troubles before he gets his passport)

Back in Germany he completed his studies in 1973 and was lucky to find a job otherwise he had to leave the country. His career as a ship construction engineer with special field static had started. Being detailed obsessed, but relaxed when needed and … stubborn as he is, there was no problem he wouldn’t take on. And he builds his career and reputation to become an asked and highly recommended static engineer… No music though.

The frustration started taking overhand. Despite the good jobs, the relationship with his wife and his friends in Hamburg there was something missing. The sky was rumbling and was about to fall on Theo’s head. Then he met a Greek composer and guitar player. After they’d spent some days together Theo asked him a question that started forming in his head a while ago: “I would love to learn to play the piano, but look at my fingers. Do you think I have a chance? ”
The composer look at the bend fingers and said: “impossible! why don’t you try trumpet instead?. That would work” …

Theo is stubborn. You gotta give him that. And that’s a good thing for Theo. One month later the frustration that had build up every more, was totally gone when he went home one afternoon and said to his wife:  “I JUST BOUGHT AN UPRIGHT PIANO” and smiled from ear to ear. Her reaction was “Why, you can’t even play it?” …

Theo took lessons, his piano teacher ignored the bended pinky fingers and showed him how to play scales and chords and arpeggios and a bunch of other stuff, impressed how fast this 31 year old, full-time working man would absorb almost  anything he learns and will ask for more and more and more. One day Theo called his father on the phone and played him a couple of chords. “Well done my boy, well done” said his father. Unfortunately Theo’s father died 5 months later and Theo’s secret wish to play together will stay unfulfilled.

Life had changed for Theo. He created a band, (him playing piano and singing) with two also stubborn and detailed obsessed German musicians who had extensively studied and were still studying the greek rembetiko music. These two are heavily involved in Theo’s musical development. So the three of them would play in taverns for little money, playing rembetiko music just before it will be revived in Greece. They would practice and gig and have fun and Theo would feel complete.

One day, Theo is sad. He asks his fellow musicians to play a certain song for him. He need to hear and play it and sing it right now. His bandmate who plays the bouzouki refuses to play the song. The reason: they play it too fast, need to practice it more before he plays it with them again publicly. Begging, swearing, “threatening”  did not help at all. Theo would not get his wish, this song will be played again after they had practiced it. Period. Theo went home that night and cried. The next day he knew exactly what he had to do. A little later Theo was holding a new handmade bouzouki in his hands and started learning how to play it. He was 36 years old.

Theo had fought to get music back in his life. And he succeeded. Since then he would be playing constantly (along the full-time engineering job) start writing own songs, give concerts or play in taverns. He will learn more and more, how to record, mix, use a computer and music software etc. He would make music with his wife and with his friends. Show his daughter the first notes on a piano. He helps young musicians anytime, going way out of his way to make things happen for them and he stayed “thirsty” and curious all the time. Always learning.
Last weekend we celebrated Theo’s 70th birthday in a house build on the ground where he was trying to play the mandolin 60 years ago. The house was full of friends,  food and wine and  full of music. We played two days,  the second one started  from afternoon to way-past-midnight almost non stop. With the highlight, among Theo playing and singing, his daughter playing along with her saxophone improvising over greek rembetiko songs.  “Well done my girl, well done” said Theo smiling from ear to ear.

Well done Theo, my friend. Well done! You are an inspiration.

Panos Kolias is a film, tv and concert music composer and musician.
He regularly produces cues and other commercial music for major television programs like CBS, ABC and others.
He's a part of the electronic duo DubLion Project and works also as a musician, educator, orchestrator, and technical consultant.
Besides composing for TV and film and composing concert music, he holds a lecturer position at the Hochschule für Musik und Theater in Hamburg, teaching Music Technology and Film scoring courses.